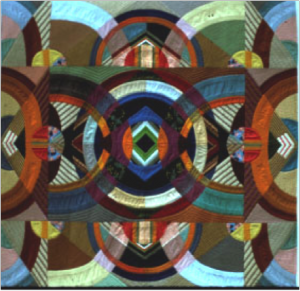 This was the first major exhibition at the newly organized Dairy Barn Cultural Arts Center. Although it was called an arts center, the interior of the building was still very much a barn. The trenches were still in the concrete floors; the stanchions were still in place; there was nothing covering the windows; and even though the cows had been gone for a decade, there were flies everywhere. While it is unimaginable that anyone would consider displaying quilts in such an environment today, the artists whose works were deemed “not a quilt” (and therefore quite unacceptable to the organizers of the other quilt shows of the day) were delighted to finally have an opportunity and a venue where this newly developing cousin of the classic quilt — the art quilt — could finally be seen.

In the program that was available in Athens, Ohio, during the 1979 exhibition, there was the following introduction, written by Gary Schwindler for this show. Click here to read his introduction.

NOTE: The artists retain the copyrights to their images.