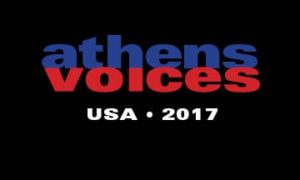 Athens Voices  is an all media, juried art exhibition featuring the diverse styles and visions of local artists. This exhibition is open to all visual artists residing within 30 miles of any “Athens” community in the United States of America.  Artworks will be judged on originality, innovation, concept, technique, and craftsmanship.

Accepted works will be on display at The Dairy Barn Arts Center from January 14 to March 25, 2017.

Darryl Halbrooks’ visual art has appeared in numerous exhibitions in the US and abroad and is included in many private and corporate collections. His fiction has appeared in many literary journals. He is professor emeritus from Eastern Kentucky University where he taught painting, drawing and design from 1972 through 2006.  He maintains studios in Kentucky and Colorado.

Marcy Nighswander is a professor in the School of Visual Communication at Ohio University and teaches photojournalism.  Her personal creative photographic work has been broadened to include digital infrared photography. She has had her photographs in galleries around the country, but she is most interested in work that has been recognized regionally.  Prior to teaching she was a staff photographer at The Associated Press Washington, D.C. bureau where she was one of a group of AP photographers that won a Pulitzer Prize for Feature Photography for their coverage of the 1992 presidential campaign.

Tatiana Veneruso is an artist, designer, curator and collector living in Athens, GA. Connecticut-born and South Florida-raised, she graduated with a BFA in Illustration and Sculpture from Savannah College of Art & Design (Savannah, GA) in 2004. For two years, she served as Director of the Athens Institute of Contemporary Art, a non-profit, contemporary art gallery. She is a lover and collector of art, fashion, and antiques. She is currently working as a designer, creative + marketing consultant, and independent curator. She also curates a virtual gallery project, TV Gallery.

JANUARY 14
Exhibition Open to the Public

MARCH 25
Exhibition Closes to the Public

If you have any questions, email us at:  artsinfo@dairybarn.org.