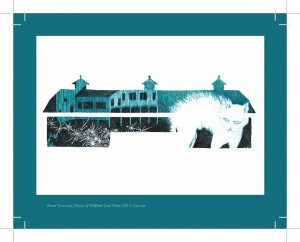 Curated by Gary Pettigrew and Martha Laufman, this exhibition featured artists working on and with paper who have lived, worked, or studied in Athens, Ohio, past and present.  While paper is the material, the technique is variable.  Work installed will range from printmaking and photography to performance and installation.

Jurors who come to Athens from out of town always speak of the high quality of the work they see submitted to our exhibitions. I’ve been here for a very long time, and I’ve known about that for a very long time. This is a great place to be for artists who want to stay humble. One of the best things about putting this show together was the wealth of wonderful Athens stuff I hadn’t previously known about. This show is a microcosm of sorts for art in 2014: variety, breadth, individualism. It’s just as they said it would be, at the start of the computer age: as communication expanded and sped up, the availability of knowledge about what people are doing has fueled the growth of individualism. People see, in a world where everything is being done, that what they do is as viable as anything else, and they go for it. Thanks to co-curator Martha Laufman, who provided both agreement and argument. Thanks to the estimable exhibit co-ordinator Courtney Kessel, and to the fine staff of the Dairy Barn for their always excellent work.

Many of us who came to Athens in the 60‘s and early 70‘s began developing our political, cultural and counter-cultural awareness amid protests, violence and social upheaval. Athens and the surrounding area became a haven for many like-minded individuals who chose to remain or return here to become artists, musicians, teachers, farmers, professionals, or business owners, and to raise families. The young artists found mentors among the already established artists living here. Some of both groups are represented in “Athens on Paper”. Visionaries among us saw the need to save the old Mental Health Center dairy barn, 100 years old this year, and create the cultural arts center now celebrating its 35th year. The arts are still thriving in the Athens community and this exhibit celebrates the wealth of artistic talent found in the region. The primary objective for the show was to showcase the work done locally on or with paper, whether in the more traditional forms of drawing, printmaking and photography, or in new innovative ways like sculpture, installation, performance, and video. Another objective was to give an added perspective to the creativity of our area artists who often embrace another medium outside their more well known work, in this case paper. We are indebted to Courtney Kessel, the Dairy Barn Exhibit Co-ordinator, for introducing us to the new and exciting work of younger artists previously unknown to us. Thanks to my co-curator, Gary Pettigrew, who as an O.U. art professor was one of those primary mentors for many artists still in Athens, as well as innumerable others who have gone on to establish careers in the art world outside our haven of Athens, Ohio.